Brin loves the outdoors and will spend hours sitting on his table (yes table) surveying the garden.

He also likes to dive into any shrub, bush or flower bed containing anything that should be ‘naturally’ upright squashing them flat. I have also never known a dog to ‘disappear’ so quickly, as if by magic.

He also walks on tip toes..literally. I have never seen this before but observed this talent when he discovered a rat living under our shed. Brin would rush out in the evening, stop, listen then tip toe across the patio.

It is the funniest thing to watch.

The problem is that once he gets ‘one on’ there is no stopping him. 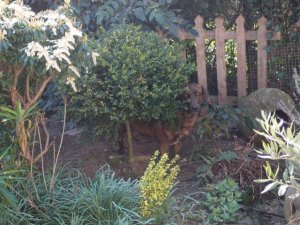 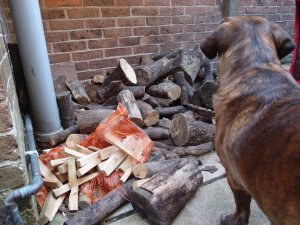 this once was tidy…

In my greenhouse there was a mouse…a small country mouse that I had been quite happy to share my space with. Brin knew it was there and I would have to trick him into moving away by throwing a toy if I ever wanted to open the door.

His obsession with this mouse grew quite intense and he would snort loudly through the crevices, where the greenhouse was nailed against the wall, as if he thought could blow the critter out… rather like the battle between the wolf and the three little pigs.

For weeks I managed to keep him away but Brin, being Brin, was not going to give up easily.

The door had been left slighty ajar one evening and with one swift swipe of his paw he managed to prise it open and fly inside.

The chaos that ensued was frightening. Shelves came down, pots went flying and to cap it all, in his effort to grab the mouse who was in full flight (bar a superman cape) he backed up and went straight through three panes of glass. Luckily, two broke away from him and I just managed to catch the top one before it came down  on his back.

Out came the mouse, followed by Brin, and the once adorned flowerbed adjacent to the now wrecked greenhouse became a hunting ground. Leaves, flowers and mud flew everywhere and as I stood there clutching the heavy loose pane I could do nothing but watch in despair.

The mouse had hidden itself in a clay ornament, shaped like a huge mushroom, and Brin was now snorting loudly though the base of it. Over it went and with one stomp of his paw the top broke off and he saw, to his delight, his long-awaited prize. 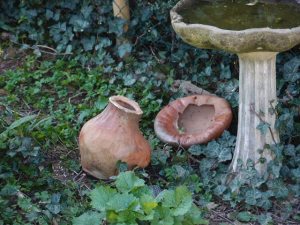 The mouse is now buried under a forlorn looking rose that once had many blooms.

← motorways and lamposts…
Pleasure and pain… →

One response to “well, I didn’t like that plant anyway…”