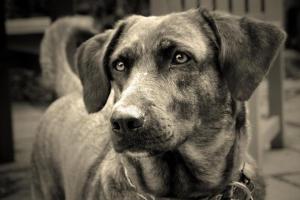 In March, 2010, the Coldstream Guards were clearing a road in LasKar Gah, Helmand  province when they spotted a small brown stray dog barking at the side of the road. On closer inspection they found that he was barking at a hidden bomb device (I.E D) that would have certainly killed at least two soldiers at the front of the line.

This little brown dog had saved their lives.

Taking him back to their base, due his friendliness, he quickly became a source of comfort and companionship, earning the name ‘Alan The Vallon’ as he would accompany  the troops on many patrols through heavily mined areas without incident. He knew the smell of such dangers and had probably witnessed the effect through living rough in that area for many months before.

During a fierce firefight with the Taliban, ‘Alan’ was left behind as the troops were airlifted out to safety as ‘strays’ were not allowed on military vehicles. It was not what the lads wanted but they had no choice. They also knew that ‘Alan’ had often trailed off now and then and had always found his way back to the base..so they hoped this would be the case after this event.

‘Alan’ did not return.

Time came for the soldiers to leave but before they did they left word for the new input, The Gurkha Rifles, to keep an eye out for him and why but months passed and still nothing was seen or heard of him and it was assumed he was dead.

Then, during May 2010, word came back from an Elder at a local village that a dog was being held to ransom at a Taliban outpost. This dog was deemed valuable as they had been watching him guide the troops through dangerous areas without the usual animal army protective clothing and also running free. They wanted money for him or they would kill him.

The Gurkha Rifles sent the Afghan National Army in to clear the Taliban base, not expecting ‘Alan’ to come out alive but after the bombardment he was found, alive, starving, suffering broken ribs but still wagging his tail.

‘Alan’ was brought back to the base where he first was taken and handed over to Captain Mark Townend who recognised this dog from the story left behind. Cpt. Mark renamed him ‘Brin’ after the colouring of his coat but also to protect him from further harm due to being very well known in the area.

There then came a bond between these two that changed both their lives, and many others, forever. 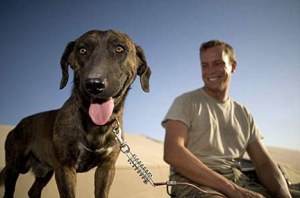 Posted by Sally and Brin on June 6, 2012 in afghanistan, award, Brin - a dog from afghanistan, devotion, dog, dogs, story