Brin would still guard doorways and, despite the house becoming a little like the visiting room of the local prison due to the ever-increasing number of stair-gates, we all were getting used to his quirks and quibbles.

Brin was never going to be easy but there were brief glimpses of him relaxing more and becoming less demanding on my time.

I was also getting used to walking him out in the forest and I seemed to have developed a 6th sense of what was around the corner. Small dogs were never a problem even if they chose to hang off his top lip and this led me to believe that sometime, in his past, he either was around puppies or had fathered some. 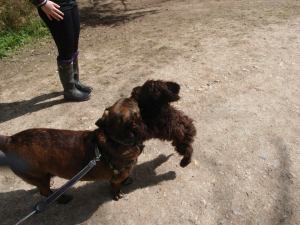 Big dogs remained a problem and around here there are many and sometimes I would be so tired and physically exhausted after a walk I would cry.

People were often very good when they stopped long enough to hear his story. Some were not and, often at a time when I felt particularly low, their words would hurt. It often felt very lonely.

Everyday I would take him out, rain or shine, and I learnt to swiftly dive into the thick undergrowth when ‘the enemy according to Brin’ would appear over the horizon. I took to taking him out mid-afternoon as this time was the quietest and the people walking their dogs were often more sympathetic to a woman hanging on for dear life to a dog who had a bark loud enough to wake the devil.

Sometimes it felt that life would have been easier had I decided not to take him on.

My home would be gate free and my nerves, having to cope with the growling every time someone came up the stairs or if one of the dogs decided to amble innocently into the room, would be less frazzled.

I seemed to spend all my whole time trying to avoid situations and, to be quite honest, I was often at the end of my tether. I adored him but the feral in him was tough to break and it seemed, at times, we would always be living on a knife-edge with Brin with me in tow trying to keep things together.

It became a huge responsibly caring for Brin as he also now had many people following his antics on his Facebook page. I didn’t share the tough times except through private messages to Sue and other Afghan rescue dog owners. But it seemed we all were going through similar situations and this helped so much knowing I was not alone. 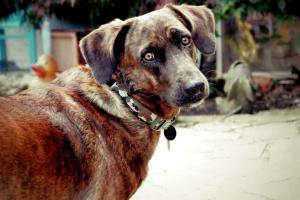 Posted by Sally and Brin on June 24, 2012 in afghanistan, Brin - a dog from afghanistan, dog, dogs, love, romance, story, war

← trials and tribulations…
where there’s muck… →