Once a year the PDSA announce awards for animals who have achieved outstanding bravery/devotion and loyalty.

Brin’s story was, indeed, well known but I had no idea it had made it to their boardroom for consideration among so many others.

Brin was selected for the PDSA Loyalty Award for never leaving the soldiers while on patrol in Afghanistan and a huge achievement for a small brown stray from Afghanistan. Everyone who had cared for him were so very proud and no one more so than Cpt Mark.

The framed certificate arrived along with a wonderful letter of congratulations and, after making a copy for myself, I sent the original on to Mark to keep forever.

A few weeks later a PDSA van arrived at our local pet store and I took Brin, and his award, along to show it to them as they had never seen one before. 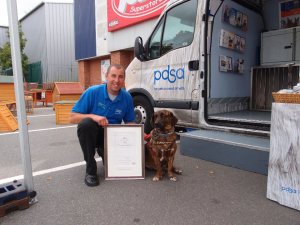 Many of the other strays that the troops have befriended over there have shown similar loyalty and I hoped that this award would help to raise the profile of these incredible animals who often go unsung in recognition of the unconditional devotion they give despite all they go through.

← where there’s muck…
motorways and lamposts… →